Smallz: What's up to the BASA staff and family.

BASA STAFF: So what have you been up to since the World Tournaments?

Smallz: Trying to spend a little time with my little girl Elexis.

BASA STAFF:  Since the time we scheduled your interview and now, there seems to be a lot of activity surrounding the SO SO DEF.

Smallz: There will be a lot of changes this year for the SO SO DEF. You know we had a new coach(NUT) last year it was his first time coaching and he did pretty good. It's just guys, meaning anybody on any team, needing discipline. So be looking for SO SO DEF to be one of the elite teams this year once again. I can't give you all the details but it's looking pretty good.

BASA STAFF: On the surface, it looks like the SO SO DEF has suffered some key losses.

Smallz:  Now that's something I know nothing about. The only person on our team that is not playing is the Pitcher Tony Johnson. Yeah that's true, he is the best middle fielder in the game, that's why we never played a 5 man. Any other players I know nothing about. If there is anybody else, I haven't talk to them, I'm the Captain and I have a good relationship with my teammates and trust me I would know.(REAL TALK)

BASA STAFF:  Are you at liberty to discuss the new additions or have there been replacements found yet?

Smallz:  I only can say this Yes he's been replaced. And we for sure have some new additions. And, no, I can't tell you. (Smile)

Smallz:  You know it's funny you asked me that. I would put us in the top 10.

BASA STAFF: Early on, it definitely seemed like you were destined for at least one if not two World titles, what happened?

Smallz:  WOW!!!!!  That's what I wanted to know. You know sometimes you keep squeezing by certain teams all year and finally they get your number when it counts, in the WORLD. We played like we knew we couldn't be beat. Big up's to Greystone, Team BBQ, and Detroit Mavericks I respect all these guys when we lost to these guys we lost. Nothing against any other teams it's just I remember how these guys beat us and when. No excuses. They out played us.

BASA STAFF: At the 2005 Worlds, the game between you guys and Derrty was one of the most watched games in all of softball, what was it like participating in that game? I mean, there were people in trees, on top of the dugouts, anyhwere they could find a spot.

Smallz:   Man. To be honest with you, with the 2 Worlds we won back to back I’ll give those back to participate in and event like that. Out of my whole life, that was the best game I ever played in. Thanks for making it happen BASA.

BASA STAFF: Derrty definitely draws a lot of attention wherever they go, but this game had a special atmosphere to it, why do you think that was?

Smallz: People coming to see the SO SO DEF(Smile) That had to be the game of the year. And of course Smallz #9.

BASA STAFF: Let’s focus solely on you for a minute. Any college or pro experience in sports?

Smallz: None. But I know the game well.

BASA STAFF: How long have you been playing softball?

BASA STAFF: Don’t worry about being modest; are you the best leadoff in the game today?

Smallz: You know I think I’m one of the best. But if you would ask me who else I couldn't tell you (smile) I hear a lot of people saying that I’m the best. To me Lead-Off is a spot where you hit smart not hard.

BASA STAFF: What was your batting average this year? 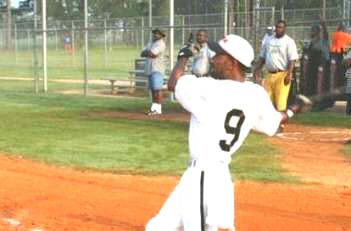 BASA STAFF: What was your most memorable experience this year?

Smallz:  I would have to say the game against Derrty in the world. Never seen nor played in any thing like it.

BASA STAFF: What was your favorite tournament?

Smallz: I would have to say Squad One money tournament in the Lou.

BASA STAFF: You are one of the Veterans on the circuit, what do you think about BASA’s rise in softball.

Smallz: I really think BASA have taken it to another level, you guys are doing a good job, keep up the good work. I’m looking forward to the Super Draft.

BASA STAFF: What do you like most about the BASA circuit?

Smallz: Seeing different teams and people from other states. It’s like a family gathering every weekend.

BASA STAFF: What changes or suggestions would you like to see?

Smallz: The only changes I think should be made. Make sure games end on time. Because I feel if you have a time limit you should never get behind...Especially when you come to the field expecting to play and they tell you we are 3 games behind. If there is a time limit then the game should start and end on time.

Smallz: To win every tournament that we (SO SO DEF) play in. Including all worlds.

BASA STAFF: That is about it, any shout outs?

Smallz: To the whole BASA family including players and spectators. To my better half, Black and Sis and the SO SO DEF family. And number 1, my little girl ELEXIS.